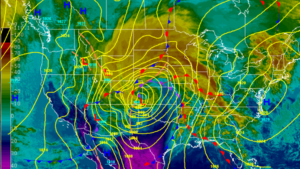 Some of you are probably wondering where this crazy weather is coming from. Hurricane-force winds blew across the plains on March 13th 2019, generating a massive winter storm. That’s Bombogenesis, or a Bomb Cyclone. If the same storm had formed over water, it would have been called a hurricane, and the effects of it covered the entire continental United States. About the same time, another massive storm of nearly equal size and strength struck the British Isles. So what could cause two hurricanes to form in winter? A Coronal Mass Ejection. 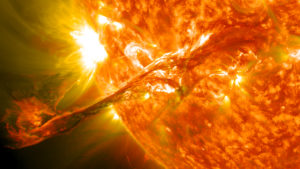 That’s right. A pair of CMEs left the sun on March 8th and March 9th. These things usually take 2-4 days to reach the distance of Earth’s orbit, and this one hit us. The upper atmosphere was probably heated up, causing it to expand, creating a temperature differential which resulted in tornadoes and hurricanes during the winter. Contributing to this effect, the Earth’s magnetic field has weakened due to a previous zap from our sun. The magnetic field continues to weaken, leaving Earth more susceptible to the changes in the sun’s magnetic field.

So what does that mean for our future? More earthquakes and more crazy weather. Forget blaming global climate change. The latest crazy weather has nothing to do with CO2 or burning fossil fuels. Our sun is causing this crazy weather. In fact, the latest findings in understanding our sun’s relationship to weather show that CO2 levels have absolutely no effect on global temperatures. It all has to do with how much power the sun is putting out, and in what frequency range that power is being generated. Less UV usually means more X-Ray or Gamma Rays.