The 2nd book of Ezdras, sometimes known as 4th Ezra, contains many apocryphal treasures. The treasure of interest today is chapters 11 and 12, which focus on a vision of an eagle with twelve wings. You can find the original text here:

There is a really good analysis on these chapters here: http://thelost10tribes.com/?page_id=33

I add to this my own interpretation of a few verses, refuting America as the fulfillment of this prophecy.

[11.3] And I looked, and out of his wings there grew opposing wings; but they became little, puny wings.
These opposing wings are not in unison with the whole, but rather puny governments that try to stand against the eagle. America has far more than two dissident groups, but none who have grown large enough since the Hoover administration to count.
[11.6] And I saw how all things under heaven were subjected to him, and no one spoke against him, not even one creature that was on the earth.
I believe this means it will be against the law to speak against the government, and that no one will do so because they will be afraid. Once more, the United States doesn’t qualify.
[11.12] And I looked, and behold, on the right side one wing arose, and it reigned over all the earth.
America does not truly reign over all the Earth. China is a strong opponent whom we do not rule over.
[11.19] And so it went with all the wings; they wielded power one after another and then were never seen again.
US Presidents do not disappear or die at the end of their term in office. I can understand interpreting this verse, as saying Presidents do not return to office. However, see my interpretation of later verses.
[11.20] And I looked, and behold, in due course the wings that followed also rose up on the right side, in order to rule. There were some of them that ruled, yet disappeared suddenly;
Only two Presidents have ended their term of office ‘suddenly’. One through assassination, the other through resignation. Does this constitute some? Perhaps.
[11.21] and others of them rose up, but did not hold the rule.
If the United States qualifies as the fulfillment, that would suggest that some of the sitting Presidents did not truly rule the free world, but were mere puppets. I think anyone would be hard pressed to show multiple sitting Presidents were mere puppets. I believe it’s possible, though.
[11.37] And I looked, and behold, a creature like a lion was aroused out of the forest, roaring; and I heard how he uttered a man’s voice to the eagle, and spoke, saying, [11.38] “Listen and I will speak to you. The Most High says to you, [11.39] `Are you not the one that remains of the four beasts which I had made to reign in my world, so that the end of my times might come through them?
Here we have the key to understanding what kingdom this truly is. This eagle is a kingdom which God allows to reign upon the Earth so that the wicked might destroy themselves through it. This is the reincarnation of the Holy Roman Empire, ruled over by the Roman Catholic Church. Bruce R. McConkie said so in his first edition of Mormon Doctrine. It is also the reason that edition was recalled. Not because he was wrong, but because having a high ranking official of the LDS Church put it in print would cause problems. It does not mean the Catholic Church as it exists today, but a future version of it. (Or perhaps it is already in the process of becoming this?)
[11.40] You, the fourth that has come, have conquered all the beasts that have gone before; and you have held sway over the world with much terror, and over all the earth with grievous oppression; and for so long you have dwelt on the earth with deceit. [11.41] And you have judged the earth, but not with truth; [11.42] for you have afflicted the meek and injured the peaceable; you have hated those who tell the truth, and have loved liars; you have destroyed the dwellings of those who brought forth fruit, and have laid low the walls of those who did you no harm.
[12.13] Behold, the days are coming when a kingdom shall arise on earth, and it shall be more terrifying than all the kingdoms that have been before it.
Are you truly saying that the United States has done these things? Is doing these things?
[12.2] and behold, the remaining head disappeared. And the two wings that had gone over to it arose and set themselves up to reign, and their reign was brief and full of tumult. [12.3] And I looked, and behold, they also disappeared, and the whole body of the eagle was burned, and the earth was exceedingly terrified.
So the last two survive their visit with the Lion, but only long enough to reign amid tumult. This fits with the brief period (three and a half years) after Christ returns as the morning sun in which the remainder of the wicked destroy each other, leaving the entire planet a place of peace during the Millennial reign of Christ upon the Earth. If President Hoover is the first of these eagle feathers, that would mean we have already begun those 3 1/2 years. That would mean Christ has already appeared. 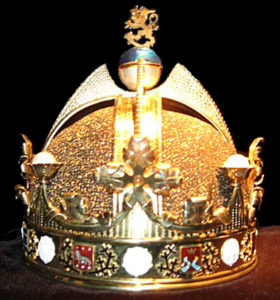 [12.14] And twelve kings shall reign in it, one after another.
Note it does not say the twenty wings shall reign one after another. There are only twelve consecutive rulers. Two opposing wings attempt to set themselves up during the reign of the twelve, and the others attempt to do so at the end, with four of them passing quickly. The last two survive to reign only a short time after being judged by the Lion, and they rule at the same time.
I look forward to your comments.