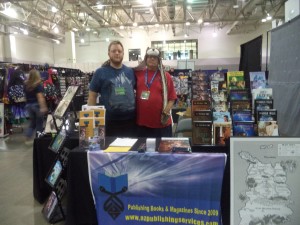 We had a great time at Tucson Comic Con this year, and I look forward to going back next year. There were plenty of interesting characters, some good laughs, and a wide array of vendors. The character that stands out to me the most during the weekend was one of my many encounters with Thor. This particular Thor held Mjolnir aloft with more effort than most throw into the role, because his hammer actually had some weight to it, being made of steel. His outfit was so well put together that I felt the need to compliment him.

“This is not a costume,” Thor replied, “this is my armor!” He then thumped Mjolnir against his chest.

I had to laugh at how well he stayed in character. Three cheers for Thor!

For this convention, we introduced a new product; Prints on Wood. The interior artwork from Orphan Dani and Traveler Dani by Meghan Mitchell came out really nice, and we sold five pieces of art. Orphan Dani also sold quit

e well, with a dozen people purchasing the book. I hope my twelve new fans enjoy reading the book as much as I enjoyed writing it, and I look forward to seeing them at future conventions, where I will have Traveler Dani and Princess Dani waiting for them. 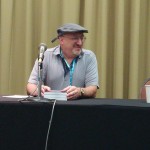 I was able to attend a couple of panels this time, and I found Michel D’Ambrosio’s panel quite informative on converting books into movie scripts and the challenges of getting those movies into production.