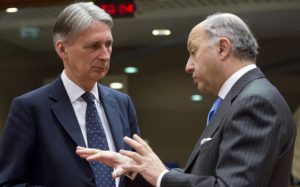 French Foreign Minister Laurent Fabius, right, speaks with British Foreign Minister Philip Hammond during a meeting of EU foreign ministers at the EU Council building in Brussels on Monday, Feb. 9, 2015. European Union foreign ministers have thrown their weight behind fresh diplomatic efforts to end the conflict in Ukraine as they assess whether to expand the EU sanctions list targeting separatists and Russian nationals. (AP Photo/Virginia Mayo)

An EU travel ban and asset freeze on Anatoly Antonov, Russia’s deputy defence minister and 18 other Russian and Ukrainian officials has been delayed by a week to give peace negotiations with Vladimir Putin a chance. – See the full article HERE

The conflict in Ukraine has once more found a moment in the spot light. Some say a Russian take over of the Ukraine would be the first act of Russia in World War III. Will Putin allow diplomacy to cool the situation for now? Can they find a lasting peace when Putin considers Minsk one of the cultural centers of the Russian people?